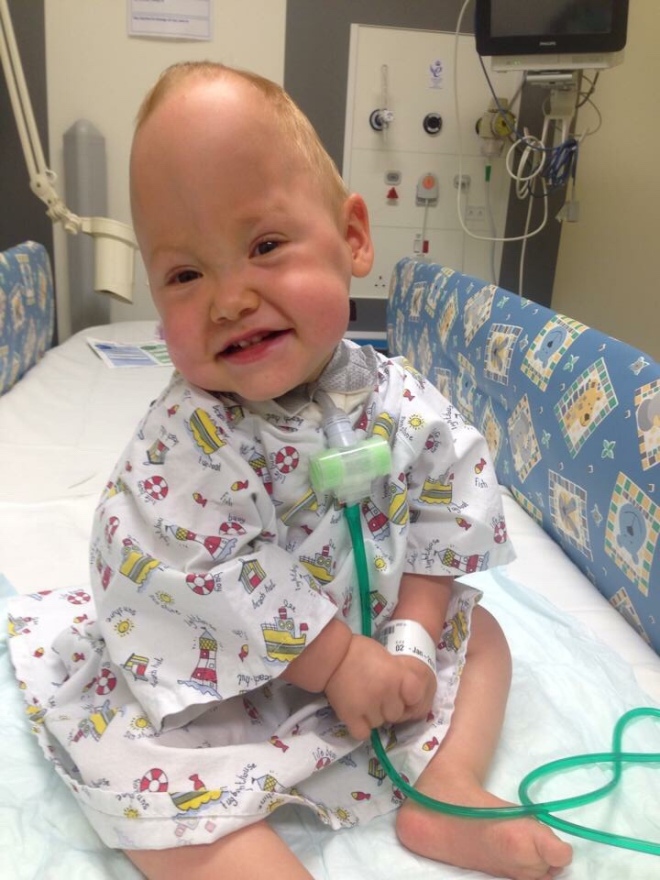 It’s 2am and I’ve just been woken up by the nurse as there’s not enough staff so I’ve got to sit up with Alf for the rest of the night. He’s just having a nebuliser and is wriggling around the bed. He’s pulled out his NG tube which I don’t blame him for – nasty things which I hate more than the trachy tube. The nurse in charge is panicking but I know that there’s more of a chance now that he will prove them wrong and eat and drink tomorrow as there’s not a horrible tube down his pipe making it uncomfortable to swallow. They are attaching a drip shortly to keep him highdrated over night.

It’s now 36 hours since We found Alf in recovery covered in tubes from his tracheal resection. The surgery went well and we are just dealing with a new tracheostomy stoma which will stay in place for the next few months until the surgical team can tell if it’s worked and a decannulation is on the cards. His tube has blocked off a couple of times while Tom was with him and I came onto the ward from looking after Rohan to a very shaken up and no colour in the face husband. Lots of suctioning, saline down the tube and Nebs luckily sorted it out. There’s just a lot of clots and gunk getting stuck down there post surgery.

The stay this time round is taking us back to when Alf had his major Cranio surgery back in 2014. On top of his extreme prematurity he was randomly born with cranio synostosis. This wasn’t picked up on until he was around a year old. We started to notice his unusual head shape but were told various things in our local hospital I.e – nothing to worry about, will sort itself out. It was his trachea surgeon in Bristol that took a photo during an appointment and sent it to his mate who is a cranio surgeon to ask him to take a look. A few months after that day we found ourselves after several appointments (and the genetics team involved) waiting to go down to theatre at GOSH with Alfie to have major skull surgery to reshape and remodel his head. Both to allow room for his brain to grow and give him a more ‘normal’ head shape. In the appointments leading up to surgery we had been given 2 different options – one where they put in metal springs which would have to be taken out later on and one where they reshape more of the skull but without the springs. As a team we decided on the latter.

We were to have the surgery with the man who invented and pioneered the surgery himself – the professor or prof for short. Think David Attenborough of the cranio world and that is your man. He was meant to be retired but there were too many patients needing the surgery and not enough of his trainees to go round. On the day of surgery the doctors came round to talk through the procedure and we were able to ask questions. A short while later while Alfie was waiting patiently in his hospital gown, the prof came in to see us just before we were due to go down. The kind of man that walks into the room and everyone goes quiet and gasps in his very aura and wisdom. He had a gentle but firm and wise manner. It might be apt that we also refer to him as Gandalf. He started explaining the procedure again to us and to our horror he was explaining the wrong procedure – one of the options that we had said we definitely didn’t want Alfie to have. Because of his greatness the medical team in the room who knew he was describing the wrong thing didn’t say anything to correct him. So I was thinking to myself I have 2 choices here – 1, be incredibly British, polite and respectful and let him go ahead and do the wrong surgery as who would even dream of hurting the feelings/ego of David Attenborough or Gandolf?? Or 2, Interrupt and tell him what he was saying was wrong so my child could have the correct procedure. Again, I went for the latter. There was a moment of silence in the room as the doctors made uneasy eye contact with me. The prof’s response was perfect. He smiled and said “I’m very sorry, we will in fact do what you have just described – the second option. I didn’t want this whole thing to come across as you simply choosing an option off of a Chinese take away menu.”

6 hours later we had our brave warrior boy back in recovery. His little face was swollen and he couldn’t open his eyes for the first couple of days. He recovered well and fast. That amazing surgeon of ours had done wonders and we are eternally grateful to him and his team. The biggest and strangest thing to adjust to straight after was that Alfie suddenly looked very different and I found myself ‘ missing’ him as he did look completely changed. One of the times I walked onto the ward after a break I assumed Tom was very kindly and weirdly giving another patient a cuddle whilst their mum was out the room, but it was my boy! We all had to re adjust. We got wonderful support from psychologists at the hospital to help us through this. Recovery time was super quick and just days after returning home we took Alfie to sidmouth folk festival. Passers by couldn’t hide their shock and stares as Alfie had a super impressive scar across the whole of his head from ear to ear in a zig zag plus tracheostomy and oxygen bottle – we were a real head turner when we went out and about. I got a lot of people approaching me asking what had happened in disbelief. I always enjoyed giving different answers – my favourite being ‘he was attacked by a shark’. Looking back now perhaps that was wrong of me but that’s sort of what got me through some of the darkness.

One thought on “Attenborough or Gandalf”